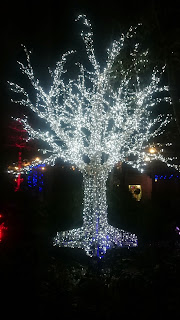 Once Mrs Bear was settled at Rock HQ, and to see how settled turn to the dog blog in the margin, yours truly dragged his reluctant self out into the early  doors of last fridayness and did about a weeks worth of jobs which included packing for a weekend away at Centre Parcs. Admittedly for me this entailed toothbrush, single malt, outdoor fitness and cycling magazines and spare boxers. For my beautiful and oh so patient wife this meant a tad more but my excuse was genetic deficit meant I am ill suited to pack for family hols. Hence yours truly shut outdoors sorting critters out until time to hand over their care, including new Berner, to our everso accommodating housesitter. 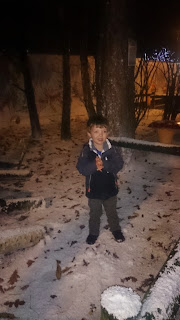 Soon (read after 6 hour nightmare traffic horrendous weather car journey) we were in the winter wonderland of Sherwood Forest where magic trees and freak weather kept the apprentice very entertained. 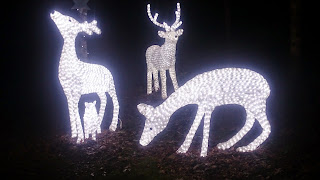 As did the magic animals. Lil Bef joined us and soon all of us were making most of the facilities of one of the UK's premier activity holiday villages. Running, cycling, racquet sports, mountain biking, spinning, walking, climbing, swimming in the sub tropical paradise, were to name but a few of  the activities we managed to steadfastly avoid for almost all the weekend thanks to all of us coming down with lergy. Huddled under the duvet on the sofa (naturally being a bloke I was the really ill one) the only thing running about me was my nose. There were some high points (fuelled by co-codamol, cold cure and one of speysides finest) such as a trip to see a jolly fat bloke dressed in red and his elf helpers. This was indeed a great and memorable family moment, the apprentice stole the show by interviewing the big Father Christmas and then took to heart his advice of puddle jumping all the way back to the villa. Cheers Santa. Of the 72 hours or so resident at this mecca to sporting life I managed a 27 minute burst of exercise which in no way allowed me to consume as much chocolate as I could reach whilst feeling sorry for my self prone on the sofa.
Back at the ranch the lergy continued, the drawbridge to the outside world was lifted, crosses painted on doors to warn off unwary callers and we waited to get better. Some of us are still waiting but I had to man up and get outside today to take Bear (our Bear, the one we got back from Ireland) to the V E T. 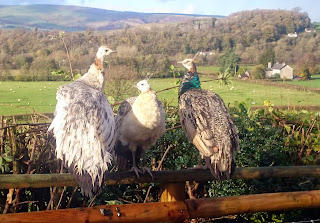 My departure coincided with the first dry spell since Monday night. So here is an opportune pic of the Pea Hen Mrs Laurel and her offspring which are now nearly as big as she is and are not featuring on any exotic Christmas menu, unlike the Kangaroo steaks found in the freezer section of a local German supermarket. 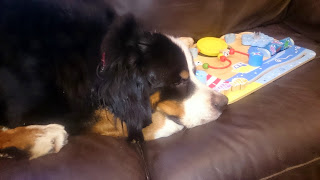 Bear is doing great. Here he is beside himself with excitement after being told by the specialist V E T that surgery would not be a good idea at this stage. Had he been the more active type, like his litter brother Spotty (aka action berner) then a new knee would have been created for him where he would not need a crutiate ligament, but as he is like this except when eating or doing what Bears do in the woods then it was felt as being a pointless exercise. So a new way has been found, some series of injections that will mean he should grow new cartilage. Or not. If he does we should see him back to his old self of....erm....couch potato grand master.
Posted by Tony at 21:26