Something to look forward to... 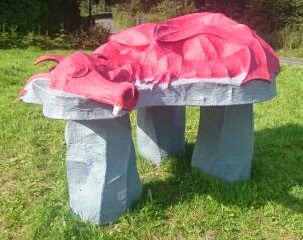 So this time last year I was dressed as a Lion "running" (stumbling) fifteen miles across country to raise money for BBC Children in Need. Today the only running done has been from sofa to toilet as manflu transmogrified to some sort of winter DV bug. As the apprentice kept himself awake most of sunday monday tuesday night by coughing himself silly we decided enough was enough and phoned the Doc. Thanks to having a well funded and smoothly run NHS our infant who had not slept for three nights and who was just exhausted from coughing fits was rushed through the appointment list and got to see a nice understanding medic at 9.45 this morning, except he didn't. Due to high demand on their time we finally crossed the threshold of the consulting room at 10.35. In the meantime yours truly had to keep unwell child occupied in busy waiting room full of scowling geriatrics who all felt their need was far greater than anyone else's. Thus we ran the gauntlet of UTC's, or Unexpected Toddler Comments. The opener of "Why is everyone so QUIET DADDY!" was innocuous enough, as were repeated requests for the toilet (its the latest game, check out the toilet facilities wherever we are as many times as possible) a real cringer of "I've just done a massive pooh!" was lost amongst the klaxon going to alert another patient that their time was nigh, but the one everyone heard was "Look Daddy, that man's a really big giant man LOOK!" (child runs forward at this stage and points to a man some 7 foot tall) Thankfully giant man had sense of humour and I ushered the apprentice into the docs room before he succumbed to any more patient tourettes.
Inside, bad news. Having given the doc the history of endless coughs and colds, runny noses, DV, few days grace, then repeat doc says. This is normal. Apparently a child of the apprentices age can expect on average to be ill from cold like symptoms for some 21 weeks a year until the age of about 7 years old. The luckless parent can expect to pick up two thirds of these bugs brought back from play groups and school and so should expect to feel unwell for some 15 weeks a year. So in other words the doc was saying man up you two and get used to it as being ill is something to look forward to. Obviously.
Posted by Tony at 21:16