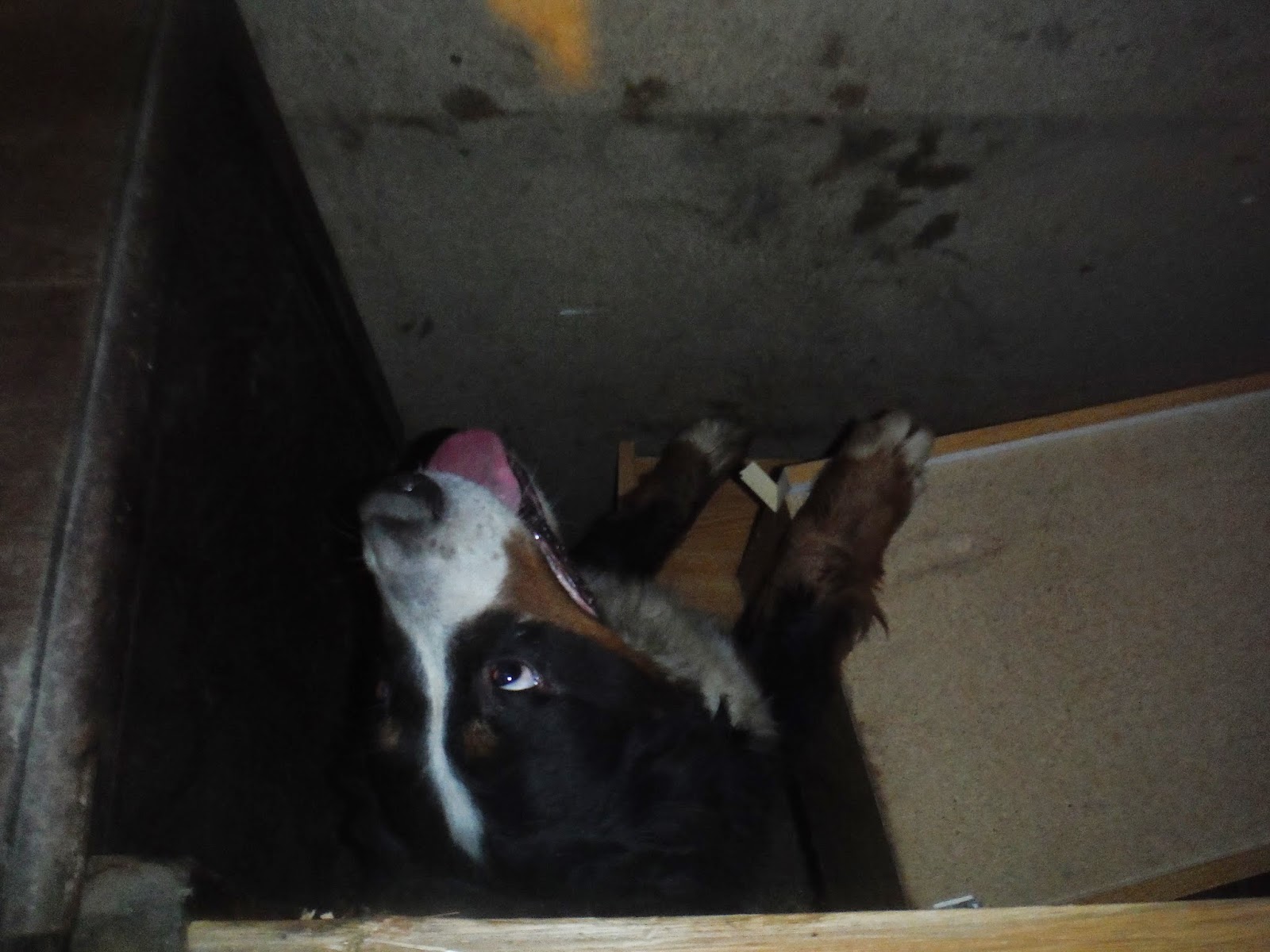 Those who own Bernese Mountain Dogs know that when left alone these lovely but dim dogs can create havoc, and any beast who has a bladder the size of a spaceman's helmet should not be left home alone if you value soft furnishings and oak floors. So our dirty dozen, yes there are now 12 (at least) are secreted at various locations around Rock HQ when we go to fetch essential supplies like today's home made fudge and pink lemonade. Bliss and WooZah get to share the annex, a purpose built room on the side of the cottage with leather arm chairs and radio 4. Now imagine my surprise today when on my return I opened the annex door to get Bliss and WooZah to patrol the perimeter fence and found one dog gone. WooZah bounded out, but Bliss, Dolyhir clan 2IC female was definitely missing. Fearing the worst I went inside to find two empty chairs, clean bowls and the shipping forecast. No dog. 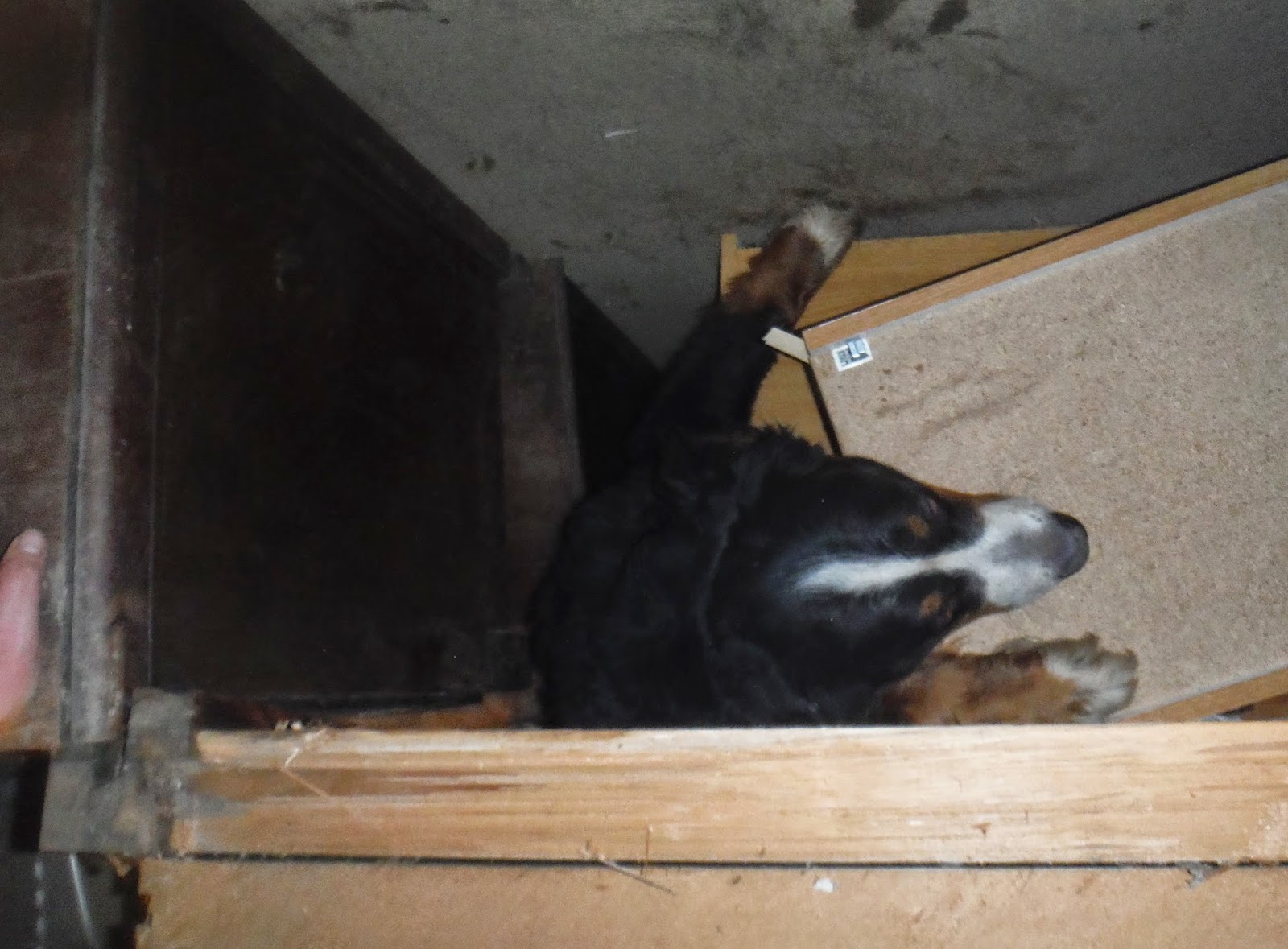 Back outside and a quick recount, one, two missing. Sudden frantic barking from inside the annex gave a clue that all was not well in Bliss' world. Now me being a champion hoarder found it impossible to throw away the old conservatory so its stored, flat pack style against the far wall, the wall that yours truly put up some while ago partitioning the annex from the black hole and the workshop. The day I need a knackered rotten wooden conservatory then I won't be found wanting, no sir, not me!
Due to the length of the stored pieces and a breeze block supporting column thing there is an 18 inch gap at the back, meaning that there is a six foot deep, 18 inch wide 30 inch long hole between all the bits stored and the wall. This was now half full of a very frantic Berner called Bliss who, for reasons known only to herself had climbed up onto the wood and glass jigsaw and fell tuther side.
As can be seen from the pics there was no easy way out, and shifting a ton or so of wood and glass by myself was not an option. Neither was pulling her out as she is a tad on the weighty side (like me) which meant only one optimal plan.
Climb down to her. 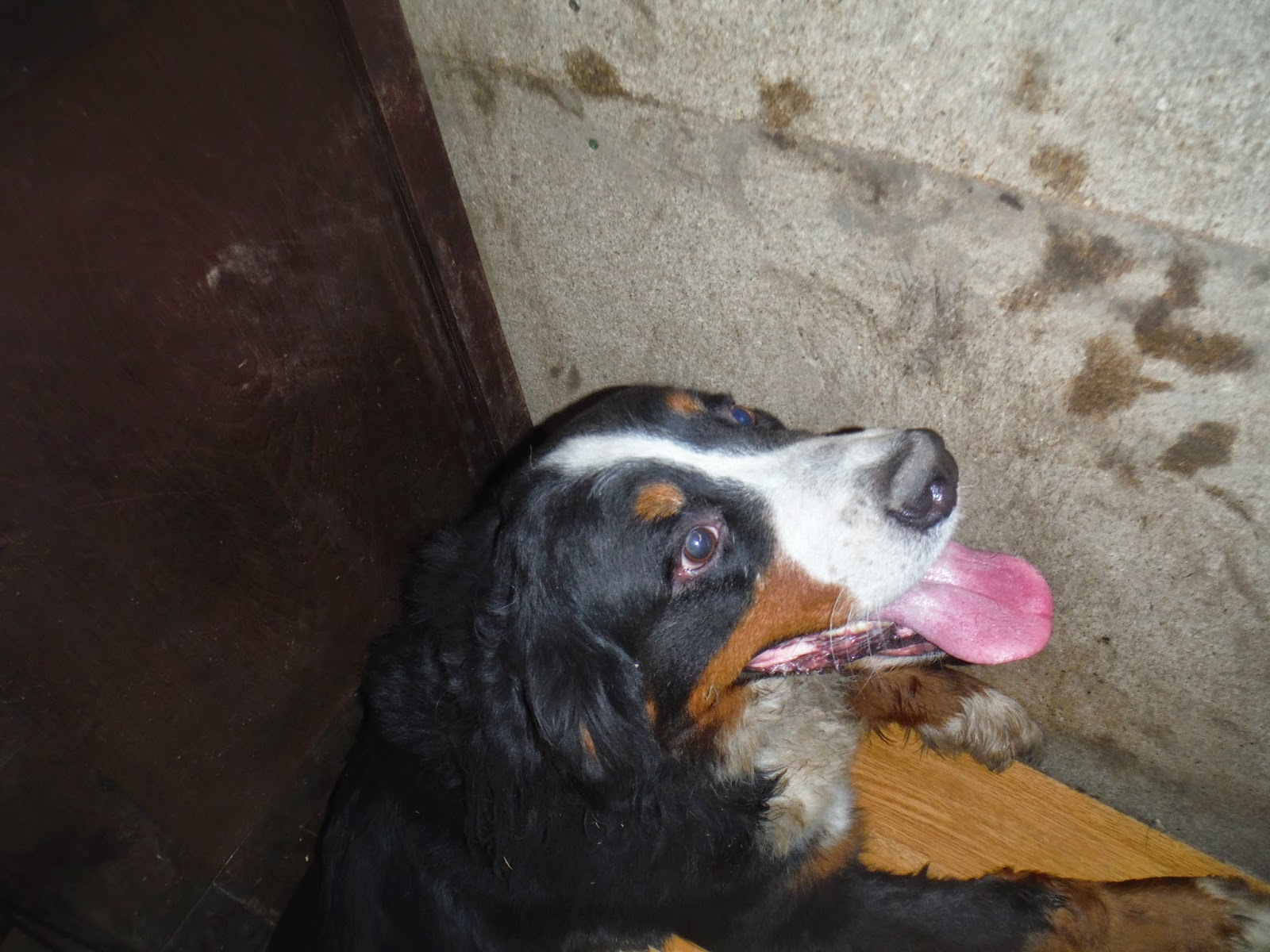 That was the plan, I actioned it quicker than I intended but had a reasonably soft landing that having stopped barking was very pleased to see me. This is us almost seeing eye to eye. I gave her a helping hand to escape, which she did, leaving me to puzzle out what she had tried to solve for several hours previously. Finally I hauled myself out, assisted by swearing and the knowledge that effort is always better than embarrassment caused by phoning for help and soon the two of us were reunited in the cottage, her on the sofa, me on the floor.
I know my place.
Posted by Tony at 21:51

LOL, hey what happened to that barktastic kennel you built? any more critters and you and the family may need to take up residence there. :)