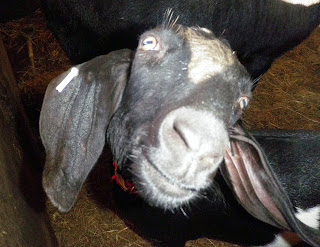 The last 48 hours or so have been a nerve wracked affair as we had two suspected UXG's (unexploded goats) in the stables. Boris the take on all comers supreme champions champion goat is due to go back to his owner after having had relations with our two not so prize but equally lovely goats Kayleigh and Eva. Come the day of transfer Boris was not as he should be, that is upright and noisily demanding silver tray service, instead he was curled up in the corner looking miserable. A non eating goat is always a problem (as opposed to an eating goat which is also always a problem) and so after recovering from the immediate panic of ohmygodthisgoatsgonnaexplode the rational side of the brain took over and natural remedies were tried. These failed to excite Boris' interests and I suppose to be honest if I was feeling rough somebody thrusting bramble tips in my face would hardly prompt instant feelings of wellbeing. Logic also suggested that Boris was in fact feeling the effects of too much relations with the girls, but as he was breathing funny, not cudding (chewing yesterdays breakfast) and most importantly not ours a vet was called.
A nice Irish vet arrived and although he was having a half day and planned to be on a train shortly after attending to Boris he dutifully manned up and entered the stinkyones den and wrestled medicines into him before almost aspyxiating himself and begging to be let out of the med bay. Boris took all the wrestling in his stride but refused to rally. He curled back up into his fetid ball and looked wretched (Boris not the vet)
Signs were ominous, UXG.
The day was spent tip toeing around in case sudden noise or movement set him off. Meanwhile Kayliegh began to follow suit and by Saturday morning was in the same condition as Boris.
More vet was called.
Now vets, much like normal humans, are divided into two groups, those that know goats explode and die without warning, and those that have no idea that goats explode and die and so do not take seriously the paranoia of those who know better. With goats counting down to final detonation rapid response was required but vet thought we were panicking (damn right, you try and explain to nice man that his champion champion is a thin greasy layer on the walls) and tried to reassure us who definitely were past reassuring that all would be well.
Having already injected both UXGs with antibiotics ( I always wanted to be a vet) the only option left to diffuse the goats was a drench to restart their chemistry. This meant yours truly donning full bomb disposal gear and manhandling massive billy goat (the size of a small Gnu) and forcing him to drink foul liquid to stop him from going off. The fact that he did sort of go off all down my left side depositing the most disgusting (even by his standards) smelling pooh was taken as a sign of affection by my beautiful and oh so patient wife and by me as a sign that he was at least still working internally. More tip toeing and hourly checks, he sneezed and failed to go bang, his eyes watered (mine too he might be ill but he still strips paint with his body odour) he peed, pooed, broke wind with surprising volume and regularity, and refused to eat.
By tea time last night he was upright and sampling new hay, not old hay, or hayledge, but a rare type of sterilised hay free from any germs and made from rye grass cut by hand in the moonlight by buxom maidens, hung to dry in gentle sea breezes and pressed into bales  a blade at a time by buxom maidens grandmother. Or it should be at £12 half bale. Anyroad up Boris was sampling this with some indifference, but at least he was eating.
This morning he appears to have diffused and was eating like only a goat the size of a small horse can. Kayleigh remains poorly but again has rallied and is eating. We dont think we have UXG's anymore. On reflection it may have been that Boris was never in danger of exploding, just knackered after a love in. Kayleigh may not be UXG either, simply old (8 years) and having been ravished by a monster the size of Boris might have been a shock to the system. Time will tell. As ever the goats are the only ones who really know whats going on with their strange chemistry and having milked one in the morning and found her dead by the afternoon we were not taking any chances.
Posted by Tony at 23:07