You've got a friend. 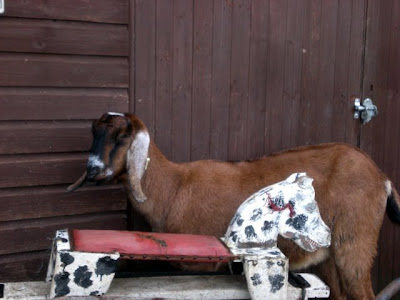 This is Geisha our damaged goat having a bit of a moment. Her leg is now almost healed, its taken a while but it seems to have stopped leaking and she gets stronger every day. She also gets stranger. Goats like company, they are a herd animal and Geisha was the bottom of the herd hierarchy. Now that Juliet, Bravo and Maggie have been sent to rehab Geisha is suddenly herd leader. Her herd consists of Ambrose, a midget Old English castrated billy, nicknamed Jaffa as he is small and seedless, Joan a black Ryeland ewe lamb who is only just bigger than a hamster and this rocking horse.

Ambrose has disgraced himself by getting into the garden so he is now Hetty's companion whether he or she likes it or not. His cards marked and if he gets in the garden again he will go to rehab with the others. Joan is a strange little lamb, she has for some reason not got the flock instinct. Unlike the others who stick together Joan is happy to boldly go all on her lonesome and leave the others far behind. She was for a short time very close to Geisha but then Joan managed to squeeze through a mouse sized hole in the fence and has left companionship in favour of grass. Geisha is a bit miffed at being left by her little friends. The rocking horse has remained unmoved by the antics of Geisha's fair weather friends. It is a steadfast and loyal beast, if a little wooden as company, but Geisha has taken to it in a big way and when its stabled in the workshop overnight she waits patiently by the door. Even in the rain. Weird things animals.