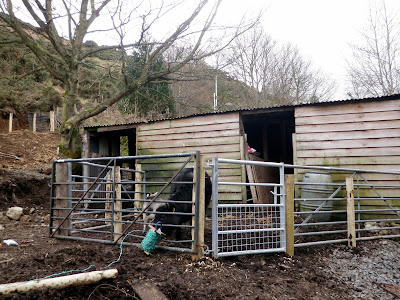 Things are looking good down at the pig pen end of the smallholding, we now have a corral for the herd of cow, you can just about see her sticking her nose through the gate and licking the barbed wire. Yes only we would have a cow that tries to eat barbed wire. Ambrose is still keeping her company much to his and her annoyance but at least the garden is saved from his ravaging. 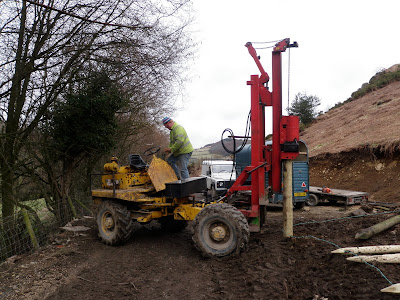 With the aid of the MkII post bodger Steve made short work of the posts. The weight on the self build post knockerinner weighs over 660 pound and the rocks just below the surface were no match for its power. I withstood the freezing temperatures to observe new skills, none of which I shall master but at least my incompetance will be better informed. The modern age continued with my first encounter with a petrol driven drill, an insanely sharp chainsaw which started first time everytime and a wonderful device called a Gripple. These small metal and plastic devices when used with a colourful combination of swearwords and an incredible ratchet thingy made from the nose cone of decomissioned space shuttles (honestly you cannot believe how incrediblely light and strong these plier/wrench/ratchet things are) join or tighten the strands of wire. A really simple way to tell if the wire is tight enough is to pluck the top strand. If it makes a sound similar to an open D minor chord on a guitar you know you are pretty close. Careful not to over tighten it though as the end post is likely to fly out and visits to the dentist are more expensive than Gripples. 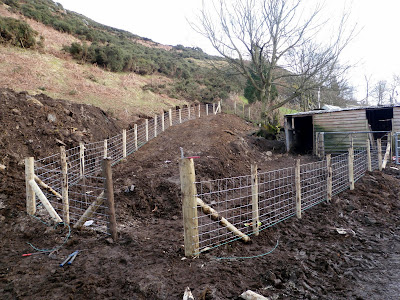 So by end of playtime today we, as in the Royal we, I tended to watch and make appropriate oooh and aaah noises, we had changed the derilict landscape to the nearly finished pig pen stage.
Posted by Tony at 19:25