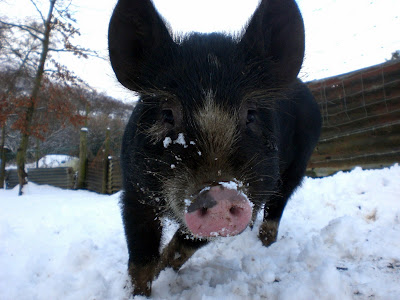 Its snowed here for the majority of the day, but as it was melting at a steady rate the result by nightfall was pretty much the same as when we started. Not being able to work outside in a blizzard I hid indoors and pretended to do "admin" instead of tidying up the mess I had made in the workshop.

Admin entailed sorting through the files on the computer until I found a file containing a big yellow button marked "Do not press".

Totally unable to resist I pressed the button despite the warning that pressing it might delete all the data ever put on the hard drive. Fifteen minutes later the computer stirred itself back to life and instead of being tidied up, quicker and more efficient it was in fact devoid of all content. It meant what it said and had restored the machine to its factory settings.

Thus followed three hours of frantic Admin to try and recover the 12,000 or so video clips and photographs that had mysteriously disappeared, not to mention the several hundred documents and manuscripts that may have one day come in useful, you know stuff like MSc essays, course work and so on. After an hour or so of mouse clicking I succumbed to the good advice of my ever so calm and patient wife Tracey who didn't point out that I had a spare hard drive that has a capacity so big it could store the content of the National Library and still have space for our CD collection that I had got especially to back up the system so that if ever I did accidentally find the file containing the "Do not press" button and thereby destruct the machine it would be all saved so not actually cause any problems especially now as there are so many photographs and isn't still sitting in the box on the desk next to the stricken PC as it was the day I got it several weeks ago, she simply said I should phone her brother who knew about these things.

After another half hour of feverish mouse abuse whilst being instructed by an equally patient brother in law we reached a point where a CD was needed to reinstall a driver. This sort of disc arrives with the machine, the sort of disc you will get around to using one day and until you need it you put it somewhere safe. An hour of searching by Tracey and I found the safe place and following a telephone call to a very nice man in Bangladesh the PC finally returned to working order.

Another hour and half of mind numbingly boring searching I found another file on the newly working PC marked "Do not open", so I did and in it was all the missing photographs.

Lesson learned I have now backed up all the files.