The four horses of the apocalypse 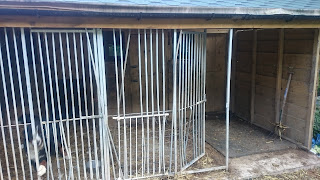 Unfortunately after a good nights sleep I did not wake up enlightened in the ways of Spearman Rhos Coefficients and any thoughts of correlating numbers for my dissertation were binned as I set off early doors to do a mans job, fix the Swiss style kennel block which looked like a bomb hit when in actual fact several bored K9s having been inspired by The Great Escape weaved their magic on the bars (6mm steel, galvanised Lions for the keeping of) and left it as effective at dog containment as a tea pot made of chocolate is to brewing my favourite morning beverage. So as project was causing me grief, DIY project would lift my self esteem and put me in a good mood for the rest of the day. Things as ever did not quite work out that way and whilst I merrily dismantled, thrilled at finding the right sized spanner within 2 seconds of looking, that was the last bit of luck that went my way. 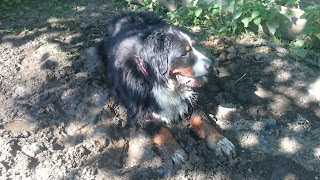 In a practical demonstration of how crap I am with figures, once I had taken apart half of the kennel block leaving lots of K9s running about, I then proudly carried past the serried ranks of interested dogs the shiny new unbreakable galvanised gate panel. The plan being construct one pen, pout comedy dog inside and go in for breakfast with comedy dog contained and unable to play with poultry which she is want to do if left unsupervised. Sadly the new panel did not fit on account of yours truly ordering 2 metre panels, 6 of them, when the kennel fronts are 1.5 metres. This oh shit moment (at which point I felt physically sick) pales into insignificance with the oh shit moment at 10.26 am, but for now at 07.43 we can enjoy this one. No amount of self recrimination, crying, applications of Pythagoras, re inventing the wheel, could solve this problem. Several frantic phone calls later I had established that the vendors who sold me these were not in their offices until Monday, the local gate seller only sells 2 metre ones and the next two farmers supermarkets could get them but it would take a week. Amazon didn't have any and failing to find any lying around and unable to resurrect the old ones I settled for plan H17 which was have a cup of tea and think about doing something else. 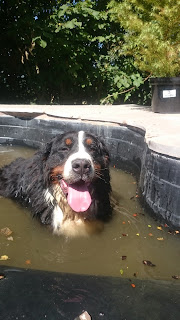 This let to the next oh shit which was when having decided to leave the kennels until Monday and buy the right stuff yours truly went to sort the horses water out only to find they didn't need any water as there were no horses there. Actually this is not entirely accurate as Misty was looking very perplexed in a suddenly very empty field. The PGOOR had struck again and so I set off with a blue bucket of allure and as much horse bondage gear as I could carry in search of the four horses of the apocalypse. 2 miles away and all uphill I spotted my prey, small specks in the distance type spotting, and as Spotty was clearly overheating I pulled the eject handle and parachuted back to HQ where 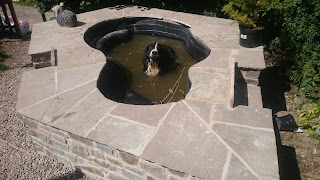 Spotty made use of the new dog toy. Thoroughly cooled he was shut in the house while I took reinforcements to fetch the naughty ones back again. 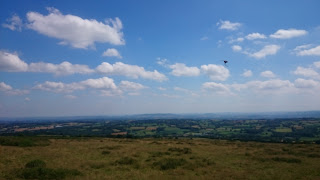 And so back on the ridge the search began 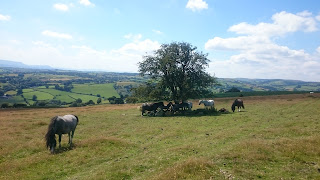 but as ever my little ponies were not sensible like the militia ponies, standing still in the shade 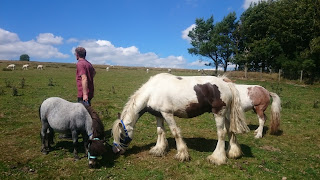 mine were cantering away chasing each other having a really fun day. At least three of them were, Pronto, the subject of yesterdays posting, was nowhere to be seen. So three in hand we headed back. 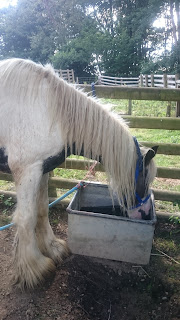 Where we all had long drinks and contemplated the task of covering 500 hectares of ground looking for Pronto. 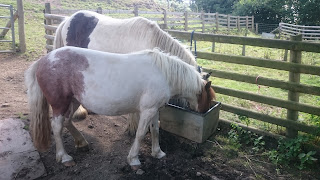 He being totally in love with Snoopy. So a tad surprising they were separated. Voices in my head now mused the possibility of horse thievery despite the unlikeliness of this. He was just a silly horse a bit lost. 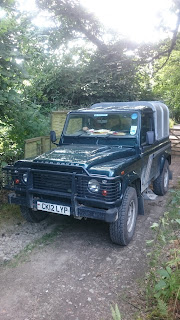 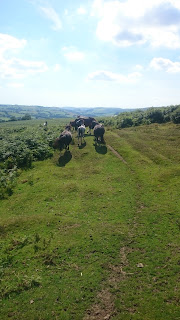 which saved a lot a leg work but in the end boots were needed on the ground to seek out our boy, but he was nowhere to be seen. Eventually we decided enough was enough a headed home only to be greeted by a massive pooh in the lane which should have had tyre tracks through it and me being all Sherlock Holmes deduced a large equine had passed (literally) this way while we were out. 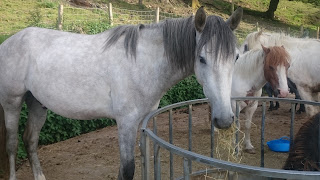 Sure enough the dopey lad was there 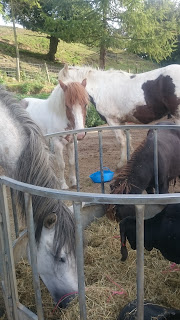 and so the day ended happily with the four horses of the apocalypse reunited and yours truly having sun burn and even less idea of statistical analysis.
Posted by Tony at 21:47