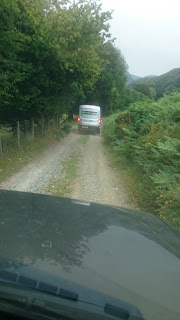 So, those that visit these pages regularly will know we live up a dirt track away from the world happy on our own Bonsai Mountain. Occasionally we have recourse to use the delivery facilities of courier companies and on the whole this presents no problems. When it does they tend to be due to lazy bastard drivers who cannot be arsed to venture up to the house and think that they can gain time by dumping whatever we have ordered at the gateway to the world. So when yours truly decided to refurbish the kennels on account of the Bernese Mountain Dogs breaking 11 out of 13 metal barred panels to the point that they were as effective at keeping them contained as Donald Trump is at advocating for women's lib, it fell off the what could possibly go wrong list that lazy bastard driver might throw a massive spanner in the works by dumping necessary new reinforced metalwork half a mile from the house. Which is exactly what happened.  The pic above by  the way is a driver proving that vehicles can traverse our lane without being hi-jacked, savaged by sheep, struck by lightening or falling trees. 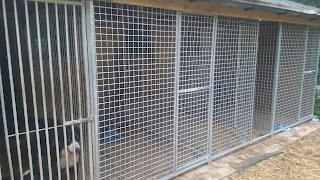 Faced with a ton of heavy metal a demi mile from the build project I plied an itinerant hay merchant with a brown drinking voucher and lo, the metal was ready for fixing. That was last Saturday, the day I had a massive SOHF over the four horse of the apocalypse heading over the hills and far away resulting in yours truly doing 12 miles of unexpected walking fetching them back. Last Saturday I dismantled the kennels, or rather the half that were falling down I assisted. The plan to replace with nice shiny new bits epic failed when I discovered that I had ordered door panels 2metres instead of 1.5 metres. Fast forward to Monday when I phone the supplier and admit my error, pay for 6 new right sized panels and arranged for a courier to collect the 6 I did not need. I asked the supplier to tell the courier that under no circumstance were the panels to be delivered (read dumped) half a mile away, they were to drop them off where they were needed, which was where the ones to be returned were waiting (clear?) 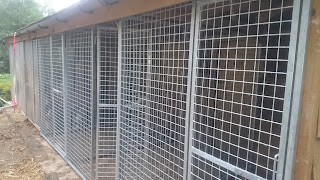 No surprises then that Tuesday they did indeed deliver the new panels so I could repair the kennels. They also dropped them half a mile from the house and hadn't collected the ones for return. An irate phone call to the hapless supplier who assured me he had told them clearly what was what. The solution was that the courier would return, pick up the right panels in the wrong place and drive them up to the wrong panels in the right place where the two would be exchanged and all would be well in the world. But not until Wednesday. 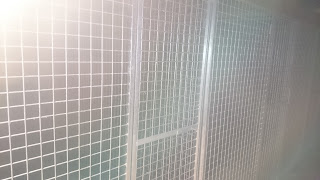 Full of the joys of cycling yours truly returned from work on Wednesday to find green grass where the right panels in the wrong place had been and at the cottage there were 6 shiny door panels so without further ado I got changed, found my tools ( a bent spanner, a metal rod that doubles as a hammer and a dodgy drill) and set about the kennels. Only to find the 6 shiny doors were the ones that previously were wrong meaning the lazy bastard driver had turned up, collected the right panels from the wrong place and headed off. To say that I was un happy by this turn of events was a real understatement. Several phone calls then followed in which I ascertained that Mike at the supplier end could not believe this had happened and suffered a right ear bending but he did let me know which courier it was which led to phone call number two to Colin who had obviously been on a course on how to deal with really irate kennel owners and soon we were talking about motorbikes but he promised that he would deal with it on the morrow, meantime he gave me the phone number of the courier tasked to deliver who happen to be Coopers in Llandrindod Wells who have previous and take being lazy bastard drivers to new heights, see the tale of a 24 hour delivery TV not delivered for 4 days and when I finally tracked it down to their depot 18 miles away the transport manager told me that if I wanted it quick I could go and fetch it. Cancelled that one then. Anyroad up Mr Reynolds at Coopers encountered the full force of my vented spleen once they answered the phone at 7.40 am. He was most surprised at my upset particularly as I had signed the paperwork. Having established the lazy bastard driver was not only lazy but a forger Mr Reynolds then suffered what onlookers might describe as a tirade of options for his immediate future if my kennel panels were not where they should be in the next two hours. Unfortunately for him my panels were now on their way to crewe which led to fresh questioning of his parentage and new options for his future should my plan to get the kennels operational by end of play remain unrealised. 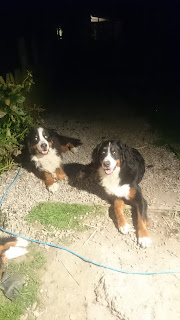 I then phoned Colin again and told of Mr Reynolds' incompetence and Colin was able to ascertain by a few keystrokes where my panels were. Miles away. So Colin sent a van (top pic) to the suppliers (who phoned me aghast as the latest turn of events) to collect the wrongly returned right panels and deliver them to yours truly by lunchtime and take away the wrong-uns all free of charge. Which is why yours truly met Rob on his first day of working for Tuffnels who was not only the bearer of the right stuff but also dead helpful to the point I felt compelled to reward his efforts with a family bag of jelly babies. 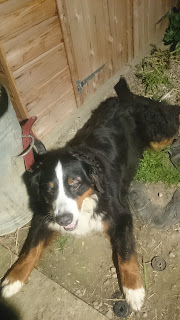 And yours truly then, after paid work, got on with the task of repairing the kennels which didn't take long but required a torch to see what was what in the end. Now we have a fully refurbished Swiss style kennel block ready for the onslaught.
Posted by Tony at 23:49

All pretty straightforward then.

I do so hope that this is not a story I will share with you one day.... so sorry Tony, I would probably shoot the bloom'n bloke and claim "senior moment" ha! but alas, you don't have that out. I not only have senior moments, I use to be blond! the kennels do look super cool.