In your face mate! 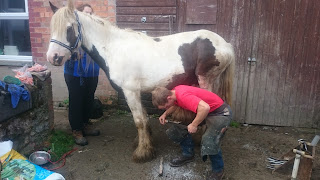 This tale comes straight out of the only happens to me file, like finding after spending nearly a weeks worth of free time working on my dissertation studiously ploughing through statistical analysis (I am to math as American Dentists are to wildlife conservation) and ending up with a bunch of figures that seemed to almost make sense but in reality I wouldn't know if they were right or not, I trust the computer to do it, so feeling happy (ish) until a quick chat with my research supervisor reveals that I had in fact used the wrong software so the results I had were in all probability crap. Back to the drawing board and a frantic weekend ahead of trying to master SPSS analysis (any helpers?) 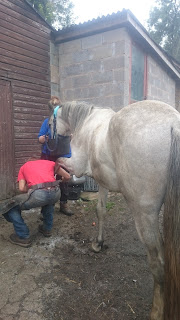 So all things horsey began the day yesterday and Apollo, top pic, the wonder foal showed everyone how to behave as he had his nails done. Pronto on the other hoof had to be persuaded with a sledgehammer to behave bucket of nuts to behave, but eventually stomach overruled naughty gene and all was well. Our very agile and patient farrier trimmed his hooves (Pronto's, farriers don't have hooves of their own) and we chatted about what a lovely horse he was. Now Pronto has a strange past, and his arrival here was due to good fortune and our friendly horse botherer helping us out. But basically he was gelded (his sack of man parts were removed) but the vet found only one. Unusual. So Pronto was either a rig, the second family jewel being inside him, or even more unusual, a mono testicle equine. His owners had him down as a rig and so felt they had a bad tempered stroppy half stallion on their hands. I had an alternative view, that all he needed was a hug. So for some buttons and coloured beads they were glad to see the back of him and after a bit of rest and recuperation with the horse botherer he was to come here. Blood tests showed that he was not a stallion, no testosterone, a proper gelding. Win win for me. 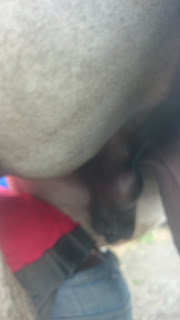 So imagine everyone's surprise when as we spoke about Pronto being so in love with Snoopy, inseparable, and how he had been playing piggy back with her (if you catch my drift) to the farrier who then exclaimed as he was at the business end "Oh, he's only got one bollock then" (farriers, always to the point) That's right my iron backed fellow, he did, the vet cut it off, rig story explained but as I did so farrier then said "well theres something dangling by my face (lovely job, the perks are endless, having horse parts waved in your mush) It could be a hernia?" says he, "Hang on" and with the type of squeeze designed to clean the wax out of your ears as well as establish the authenticity of a testicle he shouted "No, that's not a hernia".
Silence fell, aside from Pronto's whimpering, and then when we realised that now we might have a pregnant section A the oh my gods followed by the it only happens to us began. 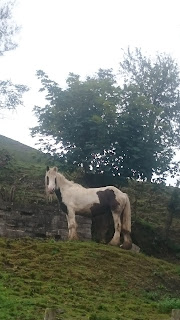 Apollo, who is a proper gelding decided to watch from afar. 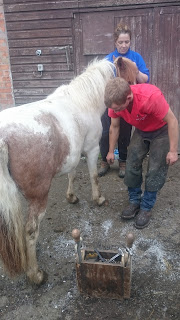 So our little mare, Snoopy, may be carrying the foal of a massive Andalusian. Caesarean section anyone? Meantime plans are afoot to remove the offending appendage from the stallion who is loving playing Johnny one potato over the herd. Mind you for a half stallion he's a lovely boy and he is still a bargain. So that makes me a winner, except in the statistical analysis stakes.
Posted by Tony at 20:18