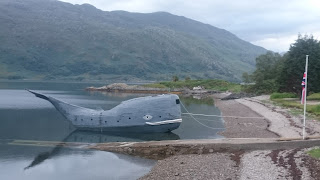 Dawn broke over Ardentigh, Moby wallowed on the shore and yours truly sucked in the vista 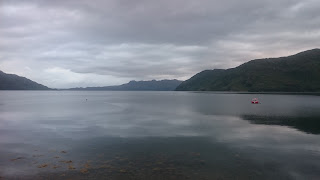 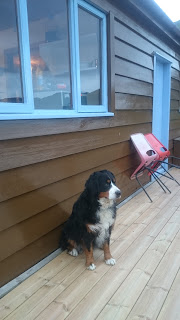 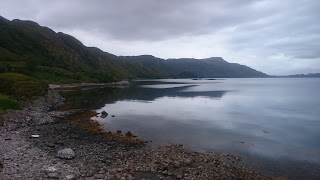 but that was about as likely as an itinerant ice cream seller suddenly arriving in our particular patch of Knoydart wilderness. 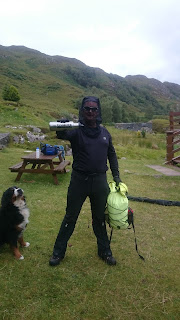 Once enough calories had been consumed the battle with the midges began, full protective clothing was needed to fend off the buggers who were about the size of flip flops with teeth. 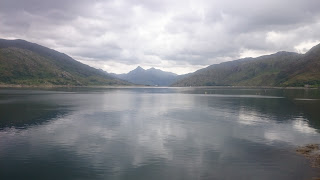 The midges being the only thing disturbing the beauty of this isolated place. 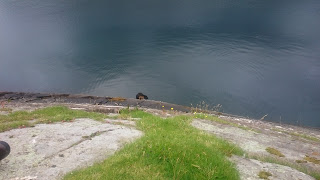 Morning was spent teambuilding and getting boats prepped and then we mozied on over to the rocks at Igloo point where Mrs Bear fell in the sea retrieving a limpet. This is she just as she went over the near vertical edge. Amazingly she managed to haul herself out as well. A surprise action Berner this one. 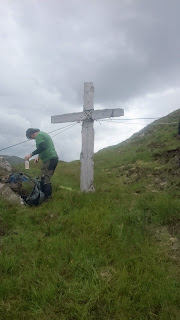 Mid pm saw us head up Calgary hill to restore the cross of penance erected some years back by a repentant Columbian drug smuggling pilot who was told to account for his sins by placing this cross which weighs some 200kg on the top of the mountain. After a days struggle (plus a weeks previous struggle) he made peace with his God and placed it here not quite at the top of not a mountain. Last summer the crofters set fire to the hill, this then burned the ropes holding the cross and gravity took over where melted nylon left off. 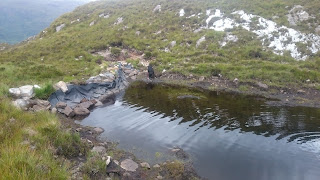 As we were so close we went over to inspect the dam holding back the two million or so gallons of water that supplies base camp. Despite the wettest summer in a long time the level was distressingly low meaning either not enough rain or more likely a leak. 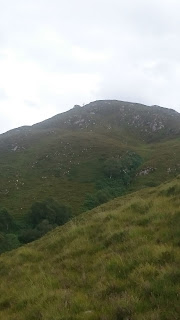 Heading back the cross dominated the skyline, tough cookie that pilot. 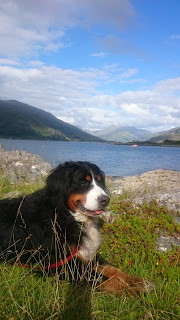 Late pm saw us shipwrecked on the next beach. The exercise involved paddling liferafts to shore and then scavenging whatever supplies that had been washed up on the beach. Mrs Bear decided to sit this one out  and dried off in the sunshine while yours truly did the leg work. 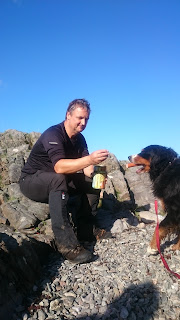 Mind you she was not so hesitant at helping devour the booty, she scoffed a whole can of oak smoked hot dog sausages. No one wanted to share them as A) they were from a previous exercise so not sure how long they had been lying around and B) you would have to be proper hungry to eat MRM sausages. 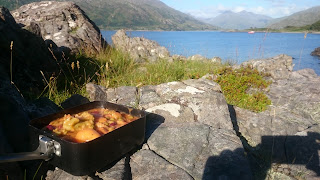 The concoction we ended up with was on face value edible and once some hot sauce had been added (enough to kill any flavour) I managed to eat two mess tins full of all in stew. All in stew has in it everything you find, so in this case there is red beans, baked beans, tomatoes, peas, potatoes,  beans and sausage, pasta, broccoli, tinned peaches, fruit cocktail and rice pudding. 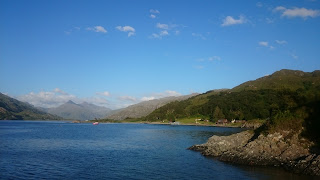 A meal best enjoyed quickly looking at the mountain at the end of the loch. 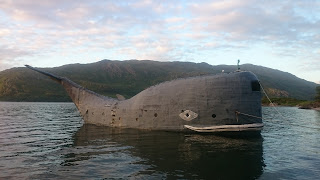 So in all an action packed day, one that didn't end being sick or rushing to the toilet 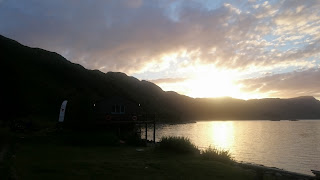 but did end swatting midges away and enjoying the sunset.
Posted by Tony at 21:03