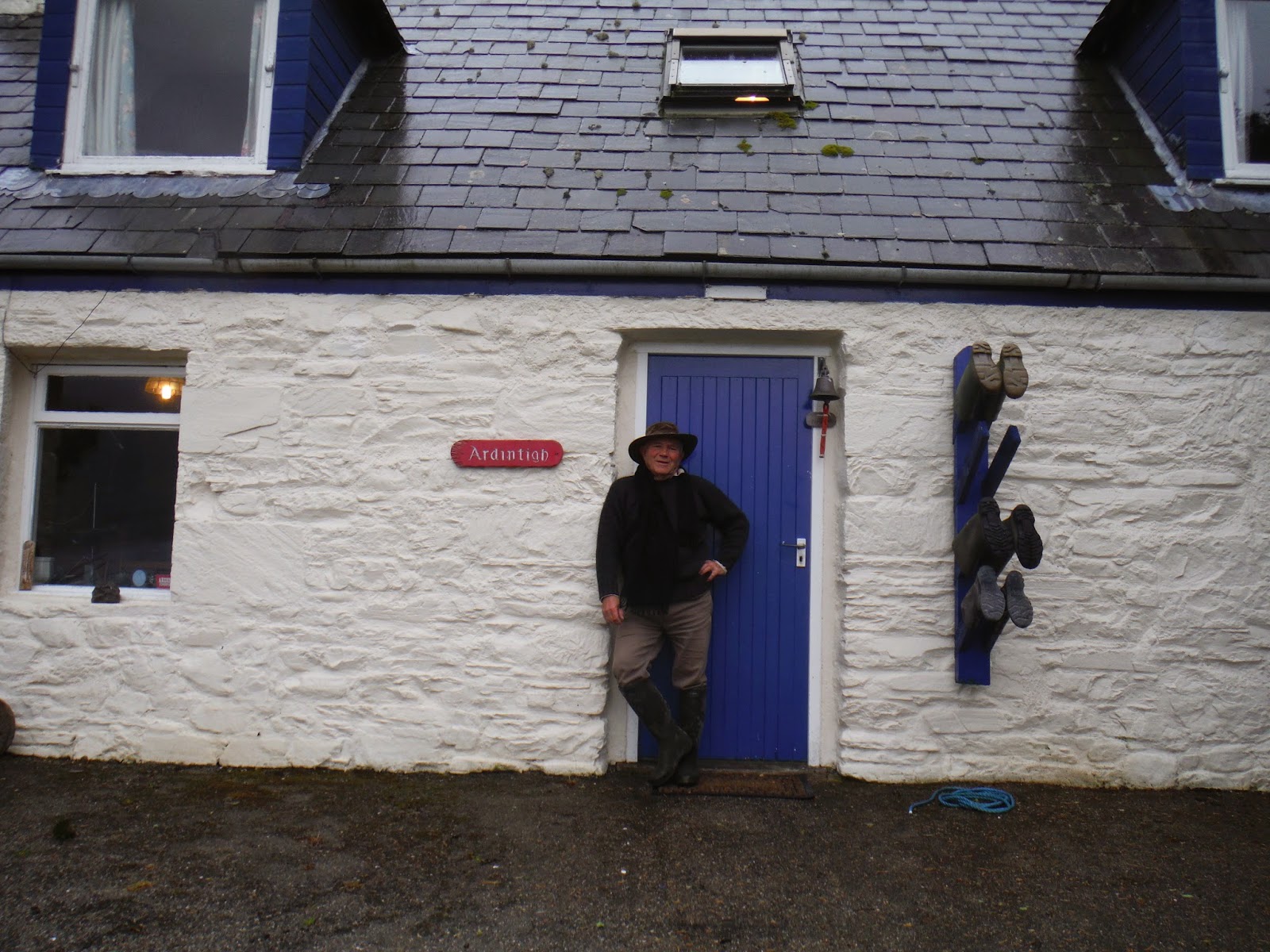 The weather followed me south so today was spent confined to barracks and getting used to life that entails more than the contents of your rucksack and pockets. Before any tales of the Highland Adventure 2014 are shared the scene needs to be set hence the pic above of the very relaxed Tom MacClean, an inspirational character who owns a peice of paradise on the southern shore of Loch Nevis, basically go to Mallaig, turn left when you hit the sea, keep the coast on your right and his is the house with the life sized sperm whale on the doorstep. 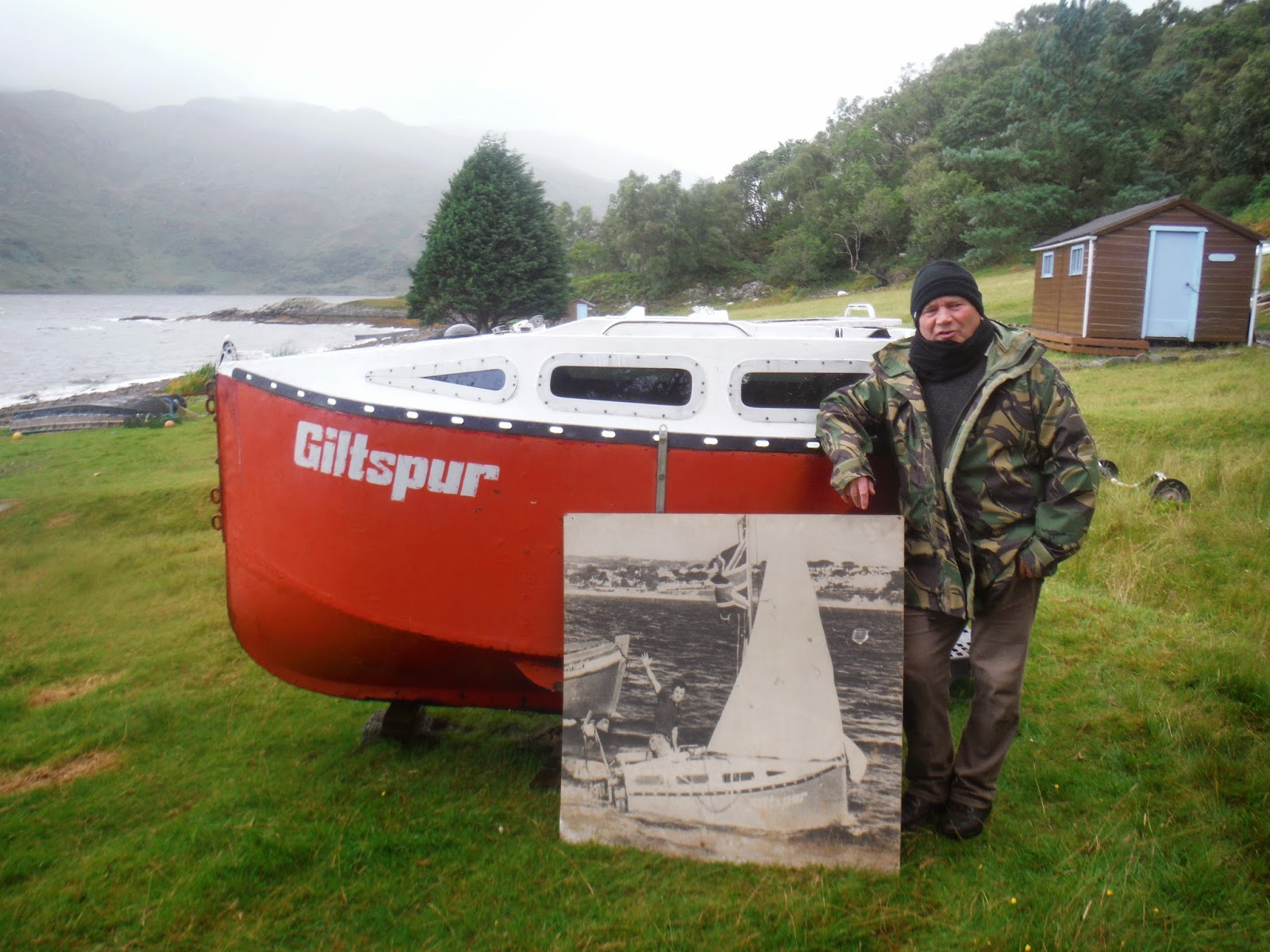 Now in days when lanky bike riders get Knighthoods for cycling around the countryside being chased by a bunch of cheese eating surrender monkeys, this man is the current world record holder for solo rowing across the atlantic, was also the first person to ever row the atlantic (hes done it twice the hard way from North America and back)Sailed the Atlantic in the worlds smallest yacht, twice, the first time he did it someone else crossed in a boat smaller than his by 3 inches so he lopped off two feet with a chainsaw, glued it back together and did the whole thing again. He has also served his country in the paras, is the only civilian to have joined the SAS (basically he left the paras, hated being out, thought he would join the SAS and camped outside the gate until the commander got so fed up with him being there they let him have a go, he passed)and is the first civilian to live on Rockall, a lonely peice of rock in the Atlantic Ocean, and by doing so got the UK 200 miles around it of fish, oil, minerals and anything else to be found, all this (and more) and not so much as a mention in the honours. Scandalous really. Not that Tom would think that, he is the most modest self effacing man I know. 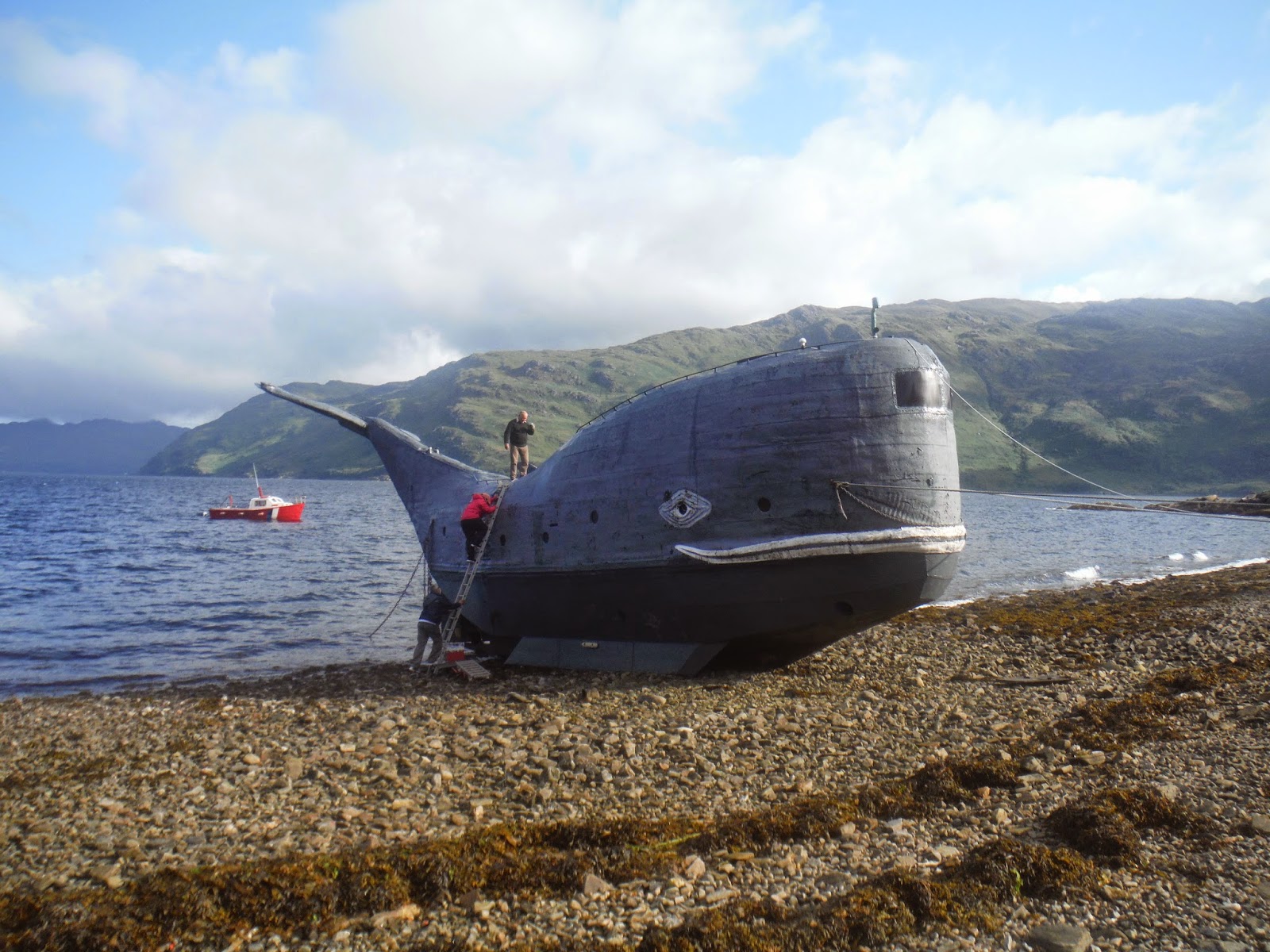 I first met him in 1996 when the Navy sent me to his adventure centre to ferry wet squaddies up and down the coast. I was also sat next to him when he drew a plan on a napkin to build Moby, a large whale shaped ship. It was no surprise to return a year or so later and see the plan had come to fruition and that MOby had been sything masts down in marinas up and down the Scottish Coast as Tom sought sponsorhip to get Moby to New York. . 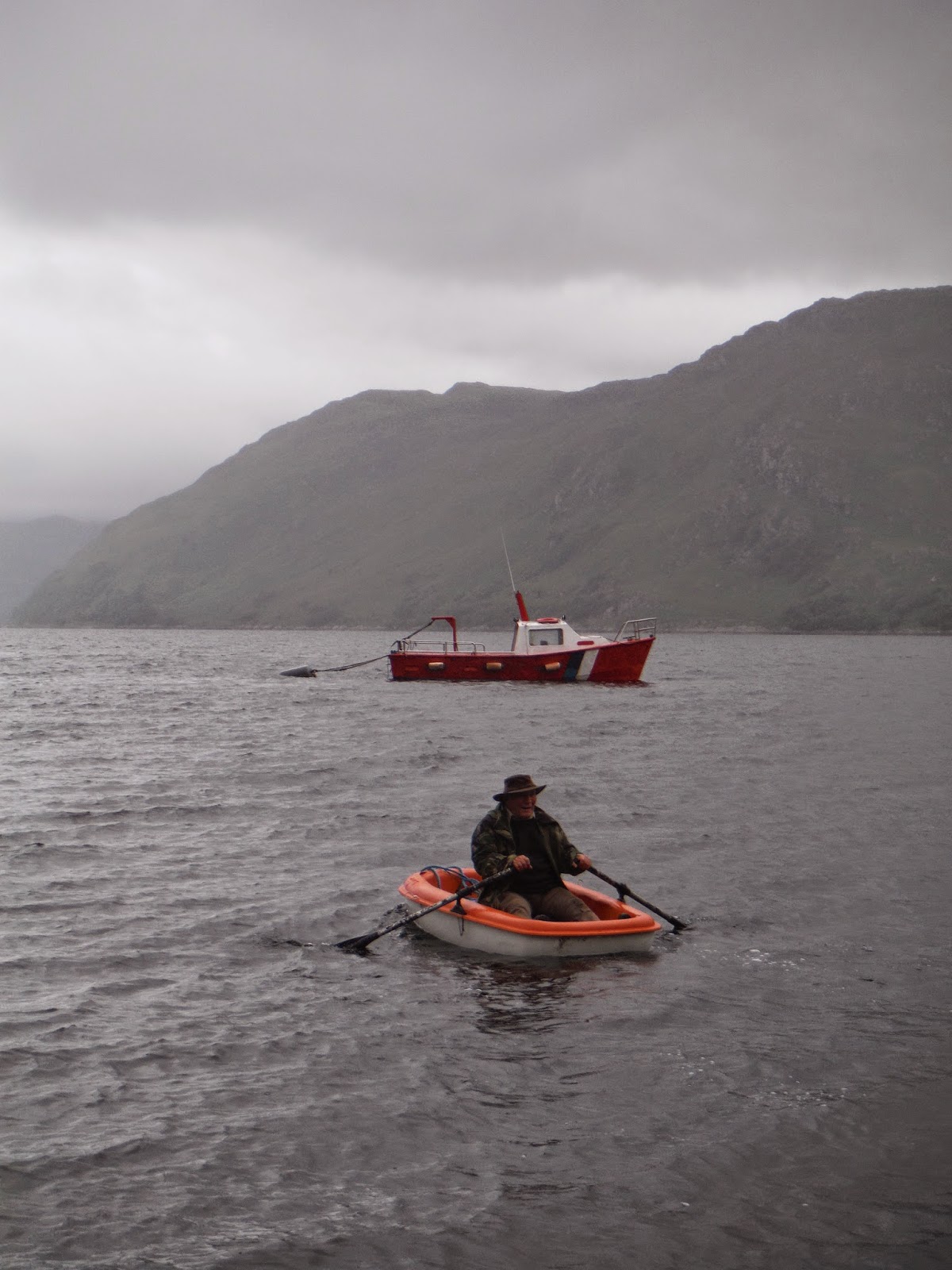 Nothing phases this man, the fishing boat behind him in this picture sank one morning so he waited until a very low tide, dived in, filled the boat with bags, pumped it full of air and when she surfaced towed her to the beach and repaired her. Meeting him makes you think you could walk to to the moon if you put your mind to it. So what better place to go than his adventure centre to get back to basics and test a small group of victims volunteers. 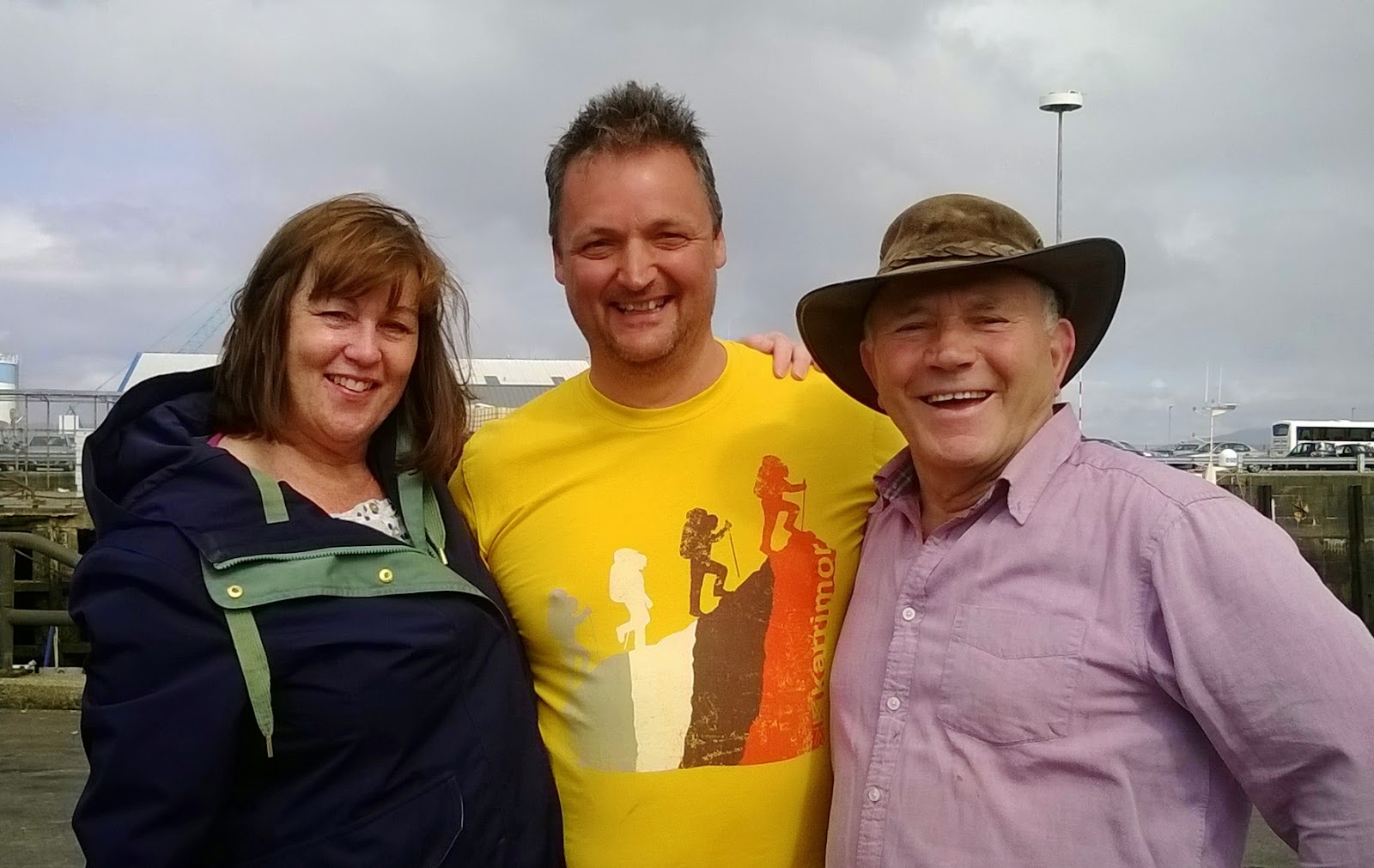 So a big thank you to Tom and his lovely wife Jill for putting up with 12 soft southerners (ok one was from Scotland) as we battled against the hostile elements, flora and fauna. We all survived and want to go back for round two next year. Anyone can hire his centre, the tag line as tough or as tame as you like is very fitting. Details of his website will be posted later, meantime Google him. 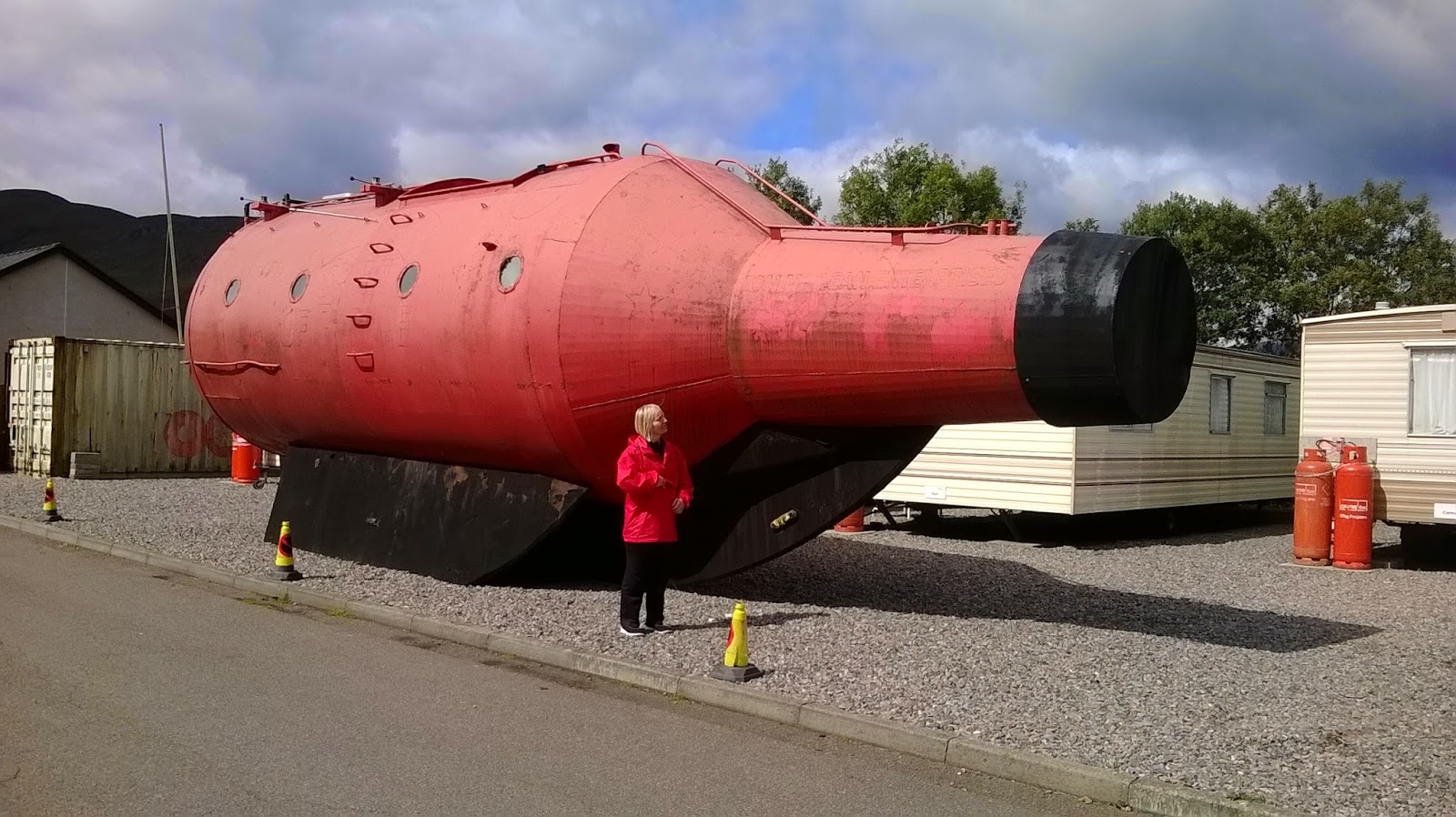 Oh yeah did I tell you he crossed the Atlantic in a bottle?
Posted by Tony at 21:01