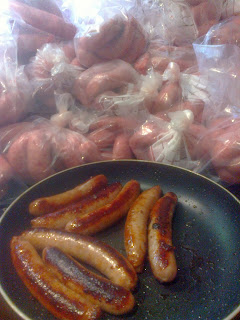 Yesterdays post got missed thanks to yours truly being on call emergency type and as it was a really busy day, see dog blog, and having also to pack nearly 150 pounds of sausage (thanks Bridget) into already overflowing freezers, a feat only managed by skillful consumption of just enough to get the lid closed, and possessing two tickets to the hottest night out in the shire, a charity dinner and dance for Help for Heroes, it was sods law that the phone rang and I had to go and assist local boys (and girls) in blue restore order to the world. 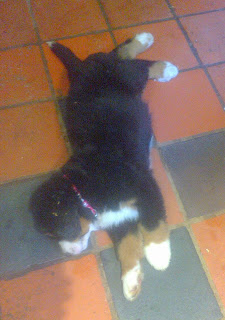 Naturally during the pork fest I had a shadow who woke up everytime the word leftovers was uttered. As the final sausage was carefully placed in Mr Whirlpool I went off to save the world. This took 3 hours 37 minutes and left me precisely 39 minutes to get changed, drive across the shire and present my tickets to the feeble looking bouncers who managed to fleece me of cash for charity mate (no such thing as a free dinner hey ho) before shoving me and my beautiful and oh so pregnant wife through the portal to another more civilized world. 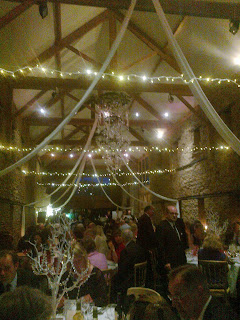 But as the majority of the room were accountants, auctioneers or insurance salesbores the charity auction didn't really get going as the tight arses all knew the value of commodities and sat on their wallets hence a parker knoll recliner value £1100 notes went for £500. Last charity auction I was at was at a very special army camp where anyone who didn't pay at least 3 grand for a mar bar were thought bad sports. Company was excellent on our table due to the complete lack of financiers and even though the main course was pork I still managed two helpings of everything. 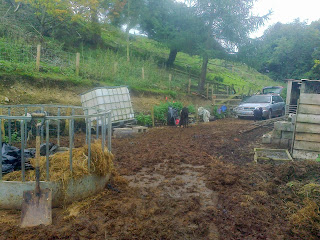 Today was a quieter more relaxed day up until the point that a friend called by and casually mentioned he wanted to buy Vic, what a pity he was stuck on the runway behind a ring feeder and 5 tons of horse doings. Vic did his part by starting first time, first time after at least 4 months silence, I did mine by clearing the runway in twenty minutes (before he changed his mind or his wife came and stopped him) and he did his part by sorting out the cd collection left in Vic and making comments regarding my efforts like I suppose its a bit like clearing snow. This led to a comparison of snow and horse pooh and the conclusion that building a horse pooh man would just get you talked about and a horse poohball fight was just nasty. So Vic has left Rock HQ and I got enough tokens for him to buy something useful, like a bigger shovel. 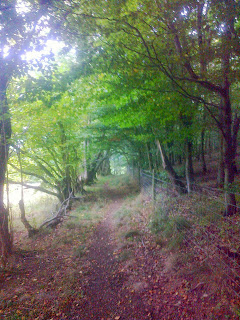 Late pm was time for some off road activity. This is one of the footpaths yours truly rested his trail running shoes on today. Life's good.
Posted by Tony at 23:29