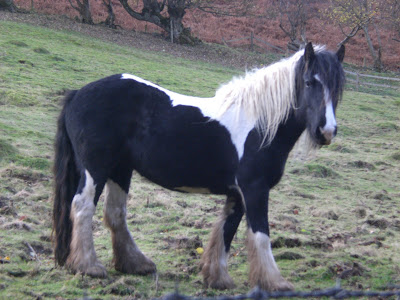 First indications it was going to be a trying day at Rock HQ was waking at first light with a pounding headache. First I thought this was caused by drinking too much of Mr20%'s vintage port last night as he and his lovely wife Annie had invited us round for dinner.
As Tracey also had a bad head the source of my discomfort was actually me catching Man Flu, a tougher version of the slight head cold that she has suffered from for the last 48 hours. This hideous disease has rendered me incapable for most of the day and meant that instead of rushing about the smallholding looking busy I have had to lie on the sofa and watch rugby, a torment only made bearable by a seemingly limitless supply of Pepsi and pretzels.
Tracey went into town to fetch these very necessary aids to my recovery. Whilst she was out the goats sensing my vulnerability ate through the TV Aeriel cable thus forcing me into the Siberian like weather to effect repairs.
As Tracey drove along our drive she saw that there was a gate open from the farmers field onto our hill. This was significant as the gate had no reason to be open and there are times when one of the local militia goes a bit stir crazy and wanders the hills opening all gates and mixing up the livestock. Pondering the likelihood of this she saw as she rounded the bend she saw three strangers with one of those huge builders rubble bags attacking the holly tree. The Oracle was in his yard so she asked if he knew who they were. You may remember if you follow these tales the Oracles reaction to me taking apples a while back, he finds it hard to share natures bounty, particularly with ne'er do wells and hippies who seek to profit from the free gifts adorning the trees and bushes of our hill.
With a battle cry that perhaps should have been better thought out "Oi! Get yer dirty hands off me bush" he and his pace maker set off at a blistering pace up the hill to remonstrate with the holly thieves. Tracey followed in case he needed CPR or the miscreants needed protection.
Somewhat startled by the rottweiler like response to their activities the three explained, or tried to, that they had been given permission by one of the local militia to take the festive greenery. This was immediately challenged by The Oracle who demanded names, dates of birth, lineage, car details and the situation almost spiraled out of control when they declared they planned to sell their ill gotten gains. By now they were totally clear over whose holly it was, definitely not theirs and with the universal placation of "We don't want any trouble mate" they fled through the open gate and across the field to the sanctuary of the farm across the way where they had allegedly given permission to gather.
It took a while for The Oracle to calm himself after the encounter and he strutted back and forth like an angry cockerel recounting previous battles where he had cut the bags of gatherers he had hunted.
The Oracle is a very generous man, and if you are lucky enough to encounter him on our hill don't take liberties with his bush.
You have been warned!
Posted by Tony at 18:58