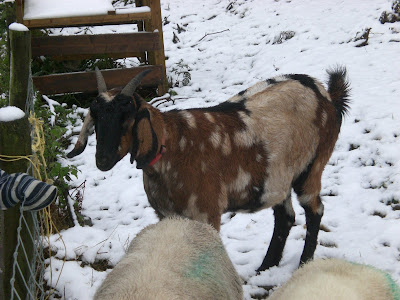 Before we took over the smallholding I used to work over 60 miles away from home, this meant hours in the car, tedious journeys, backache, bad temper and a huge fuel bill. I would be sat in my car watching the seasons change and somehow feel very disconnected from the world.
As luck would have it, just after we signed for the monster mortgage and moved my job disappeared and very fortunately I got a better job some twenty minutes from Rock HQ. There are times however where work calls me away and I have to go to London or some other large city in order to fulfil my paid work role.
Today was such a day and so it was important to get a good nights sleep as I had four hours of driving and the nightmare of Birmingham's rush hour to negotiate. My escape to the land of nod didn't get off to an auspicious start when the bedside light decided to play up. A sudden flash of light as Tracey and I lay in the dark alerted us to the fact that something was wrong. As we lay wondering if there was an electrical storm the lamp buzzed on and off again, something was up with the dimmer switch. I listened patiently as Tracey fiddled with the switch before she announced it was not fixable so she would unplug it. To a pulsating lightshow that would have been the envy of many a nightclub she valiantly tried to unplug the lamp. No, we would have to get out of bed and move it so she could reach the plug. I duly obeyed and soon we were spared the fit inducing strobes and replaced the bed against the wall in the dark.
We settled down to sleep, Tracey commented that it would be funny if the light flashed now it was unplugged, agreeing that would be a good trick I turned over and was immediately confronted by a flashing light. For a split second my fuddled brain tried to work out why the unplugged lamp was still flashing but it was my phone, Beth just letting us know she wasn't coming home, cheers. Finally sleep beckoned.
A noise.
A weird unearthly noise from outside. Both of us held our breath as we tried to hear it again. There it was, a horrible screeching sound like a werewolf being castrated with a blunt pair of scissors. Louder this time.
Tracey opened the window.
Foxes?
No.
Shhhh.
Its the goats, screaming. They were safe in the goat houses, they had food, water, shelter, no natural predator apart from me if they carried on making such a row and making that much noise they were not ill. Ignore it. They will soon be quiet.
They were quiet.
The beagles started to howl. Thoughts of dog and goat curry came and went.
Midnight already.
The goats started again.
2am already.
4am they are still calling. Tracey volunteers to check on them, both are fine but she lets them out of the goat houses as its the only way to keep them quiet.
4.30 am we settle down to sleep. Bleating outside the bedroom window, at least one of the goats want us to come out to play. I decide against throwing things at them and stuff the pillows in my ears.
6am alarm goes off and despite it hitting the wall it still rings forcing me into action. I shower, dress, grab a coffee and go. The goats, perhaps sensing my bad temper are nowhere to be seen.
Tracey text me later on, she has found out why they were making such an ungodly racket. Wolves? Hungry? Wet? Cold?
No none of these, they want a Billy goat, both have come into season and were calling for a Billy to come and ease their feelings of frustration.
We don't have one so they have settled for Crispy the Ram and are currently bothering him, at least they are quiet now, he's taking one for the team.
Poor lad.
Posted by Tony at 20:16