But we were ready for action and determined to track down Pronto who had to all intents and purposes gone feral. The plan was simple, take Will.I.Am as bait, Pronto would come over to say hello, stick his head in the bucket of allure and hey presto before you can say I hate horses he would be safely tethered and led back to captivity. What could possibly go wrong?

To start with it was too hot to think yet alone move but team Rock HQ continued.

and two donkeys who spotted the bucket of allure and wanted their share.

and still no sign of the naughty horse. By now the donkeys were a tad annoying, a definite liability and certainly unable to make their own way home. Leaving the team in the relative cool shade of several small trees yours truly took one for the team and headed off another 3 miles with Will.I Am in tow until finally we found his wretched friend Pronto stood under the shade of a large tree with 5 equally feral mares. He gamely trotted over to Will.I.Am and after exchanging horsey pleasantries he tried to refuse to follow the bucket of allure but was outvoted by his harem who trotted dutifully behind. In awe of my prowess as the Pied Piper of Equines I radioed ahead and asked team Rock HQ to liaise at a path junction where Pronto could be tethered and we could all troop home to toast my success. However things did not quite work out as planned.

We all assembled at the designated spot and all hell broke lose The feral mares took exception to two little donkeys and started a huge fight chasing the poor little donkeys into the wilderness. The donkeys too stupid to run home ran in the opposite direction followed by 4 mares and a very angry yours truly leading a dumbfounded Will.I.Am whpo clearly did not relish being attached to a swearing sweaty fat man , meanwhile Pronto sensing an opportunity not to be missed tried to wrench the arms off MBAOSPW who was now displaying signs of not being quite for patient. I was told in no uncertain terms to desist following the donkeys and return to lead point and and take the group home which I did. I know when the voice of authority cannot be crossed. Finally we made it home, one naughty horse gained . two terrified donkeys missing in action. Hardly a successful mission.

The gang were exhausted so I made cheese on toast and lots of cold drinks. Humours were restored.

However the fact remained two very small members of the clan were now alone out there and as we all know there are thieves in the area, and I'm not only talking about those that steal vast sums of money from their business by creating false invoices and paying the money into their sons account and try and hide their dishonesty by getting rid of their business partner and attempting to destroy his professional reputation, no dear reader I'm talking rustlers and donkey wranglers who are nearly but not quite so bad as the aforementioned waste of organs.

So after evening rounds and despite being tired out and completely forgetting what time it was (nearly darkness time) yours truly set off once again with a bucket of allure and against all odds found two little donkeys stood side by side nose to tail alert for attack from wolves, zombies and Gruffalo. They were so happy to see me they even forgot to be awkward on the return trip. 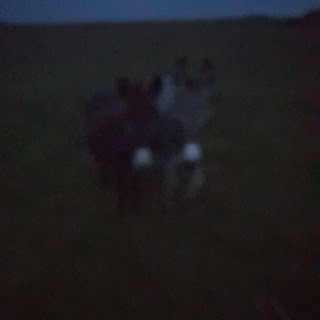 So all's well that ends well. That said it wont end well for the thieves. More of that later. Lets not spoil the surprise eh?
Posted by Tony at 21:46

Very pleased to learn the equine comunity returned to full order, even if it was as a result of taking instruction from "she who must be obeyed".
Look forward to the continuation regarding "The Thief"!!

Still waiting for the update on the thieves or was it just a pile of horse manure dreamt up by a lying thief to cover his tracks. 🤔🤔