To close for comfort 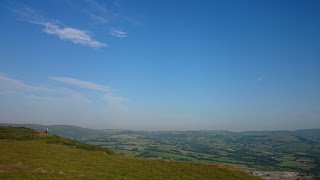 So there we were on the summit of the Bonsai Mountain at 6.30 am to take advantage of an early morning stroll before the heat got the better of us. For once we didnt have the summit to ourselves, some very unfriendly types were water colouring their hearts out so we had to take a detour in case dog slobber messed up their artistry. 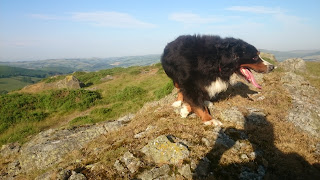 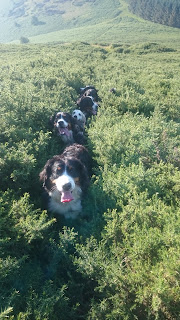 bringing up the rear as we took the detour along the gorse trail, yours truly regrets wearing shorts on this walk. 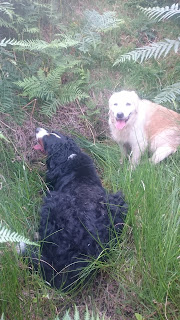 As it was a warmer morning we took it very easy and played a while in the stream on the dark side of the Bonsai Mountain. 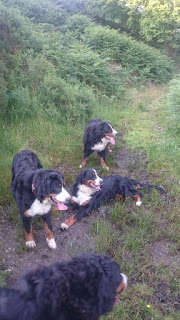 And here we are, all normal, with Elf photobombing, Tasha stood watching Spotty in the stream, Rippers cooling her belly in the mud and Rocky stood at the back. Seconds after this picture was taken the Rock Star keeled over, so sudden that I thought he was having a heart attack. There then followed a desperate struggle to get rather large stricken dog off the mountain without both of us shuffling off our mortal coils in the process. Rocky was carried, begged and pleaded with along the route as the 800 yards of difficult terrain was negotiated. By the time we got to our yard he was on his way across the rainbow bridge. Tracey had met us in the cauldron after my frantic phone call and she helped me get him in Gerry and take him to the V E T. Paul of most trusted vet was on duty (once we phoned) and his opening line of "I dont think he's going to make it" was not the words yours truly wanted to hear as he lifted a very poorly dog out of the back of the car. Rocky had heat stroke. Even in the relatively cooler part of the morning the poor lad, who is for a Berner, an old man, suffered mightily in stoic silence and it all became too much for him, the tipping point had been reached and he was in mortal danger.
Rocky was in a real state, I close to losing consciousness, I sat with him playing a hose of cold water on him while two vets inserted a cannula and got fluids into him. His temperature was off the scale at 8am, but by 9 am under the constant cold water and IV it was back to normal. As Paul and I spoke I found that the night previous a sheep dog had died of heat stroke. 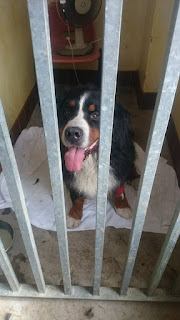 Things improved, Rocky clearly was not brain damaged but we had to check his internal organs had not shut down, gone into crisis or exploded. Thankfully by 6 pm, 4 litres of fluids and a million gallons of cold water our brave dog was given the all clear. Vets were amazed at his recovery. I was just over joyed. 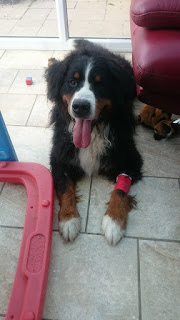 Here he is safe and well at home. Lessons learned today, remember he's an old dog, and don't assume the morning on the hottest day of the year is cool enough for a stroll with big furry animals with limited heat exchange facilities.
Posted by Tony at 16:50

Much too close for comfort, as you say. Glad to hear the Rocky has made it...