For a while now the med bay and the tack room have been knocked into one big bale store which means that the two stables are empty (another tale) and the horses evicted to the fields (or not depending on their ability to jump or find the holes cut into the fence by the firebrigade and which yours truly promptly forgot about) where they look longingly at the huge stock pile of fodder and plot ways of getting at it. Now for reasons known only to myself the last lot of bales arrived and instead of negotiating the narrow back passage (ooooh matron) to the now bale store I stuck them in the front stable (this does have a relevance to the story bear with) with the best of intentions to clear out the new now nearly empty bale store before putting the newly arrived bales back into the proper bale store. Makes sense to me. Anyway I'll move on. Thanks to the judicious use of a JCB the rear entrance to med bay is now HUGE and flat and begging to be extended hence the above pic where spare bits of previous builds are being put to good use and a small building destined to be the hiding place for the Kat is under construction. While this was going on the number one pain in  the ass equine Will.I.Am was conspicuous by his horse sized hole in my life. It was only the sound of contented munching that gave him away.

Here he is, the working end anyway, clearing up and adding to the mess in the bale store. The fat pony paused for a second pondering having a look to see if he had been busted but being the lazy sort thought it too much effort to turn around. I could have evicted him but as it was in here he was out of my way so left him to it.

Here he is inspecting the slow progress and wondering why the big door is suddenly inoperable.

The Kats out of the bag

Yours truly has had a motorbike hidden away, a design icon of the 1980s, a Suzuki Katana. Until this silver machine came into being motorbikes were pretty much similar whoever made it, this broke those rules. So for a while bits have been cleaned, repaired and when possible replaced and now it works, runs like a dream.

If only I could remember what I did with the Keys!! 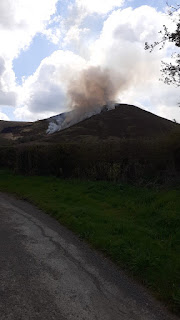 Not what you would expect to see on the Bonsai Mountain.

hence the need for 7 fire engines and millions of gallons of water.

At one stage it looked pretty bleak

with 6 firehoses around the house soaking their full range of 23 metres from the boundary in the hope of stopping the advance, talk of evacuating us and the critters were held 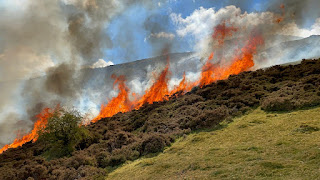 especially as things were getting out of control

and you could feel the heat when stood in our yard.

leaving us to go and survey the damage the following day

armed with bottles of water

we hunted down the hotspots

and doused them. Thirsty work! 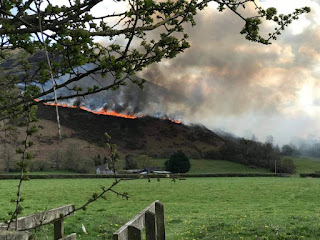 This is another view at its peak heading our way. 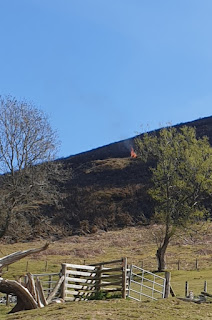 Sunday we were out again and hot spots flared up bigger than our water bottles could cope with, the brigade turned out 3 more times and when it got dark a line of flame still burned but the forcast was torrential rain so things were not too bad. 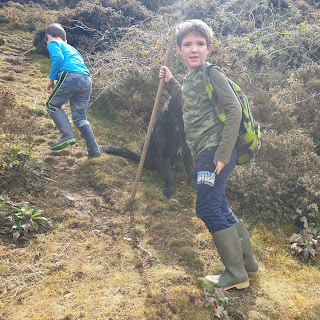 The kids were brilliant going up and down with water to quench the flames.

There was a lot of ground to cover too.

and the K9s had to avoid burning their paws as the ground was very hot in places.

Not everything survived. Thousands of birds must have been nesting in the bushes.

Ever watchful :) patrols will be a bit different now half of the mountain is fire damaged.
Posted by Tony at 12:54 0 comments

For reasons best known to yours truly I took on Ramadan this year, meaning no food or drink sunrise to sunset. Easy.

No its not. It was horrible and I managed 26 days before capitulating. Now, reasons for it being so hard were many, the thought of simple have a big breakfast and huge dinner failed to work, I didn't feel like eating early on and at sunset just felt ill. Benefits, lost weight, found I can manage to work/train/parent/cook while starving hungry, appreciated the fact I can choose to go hungry not because I have no option, but it was horrible and I failed to complete the challenge. But the good news is I'm still invited to my friends Eid celebration tomorrow and I did save enough money to feed a Bangladeshi family for a month. Maybe I'll do it next year, or perhaps just bang my head into the wall.

So in a baking hot day

the last big one of the set.

Naturally we had Mrs Bear 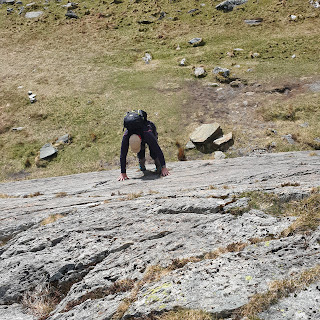 and Rich and Evie, yes dear readers the team had assembled.

So were we going to saunter up the tourist track?

No way! We were going to ascend via the crack of doom route

which is easy at first.

Time for lying around.

But soon it gets steep.

its hard to find a rest space,

The last bits are silly steep, like climbing, and the snow made it so much more fun,

This is Keeeeeef in the CoD.

And again, hes not a quick climber is Keeeeef

RRMK2 was first to top out

and pretty soon all of us were almost at the top all survived.

Farther on, the apprentice rests with Mrs Bear

RRMK2 caned it to the summit

and then the apprentice got out Eric and Ernie for the summit shot. 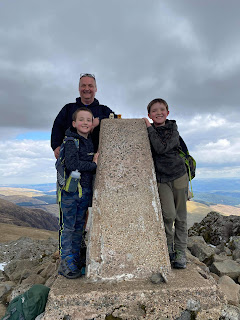 There's a shelter on the summit, no cafe like Snowdon. 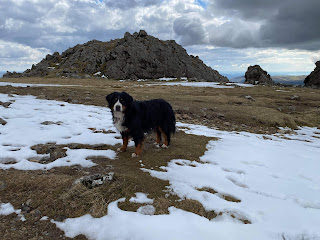 The descent was via the tourist track a much longer but safer way and the weather started to change.

Looking back...
And thats where the battery failed :)

A top day out in the mountains.